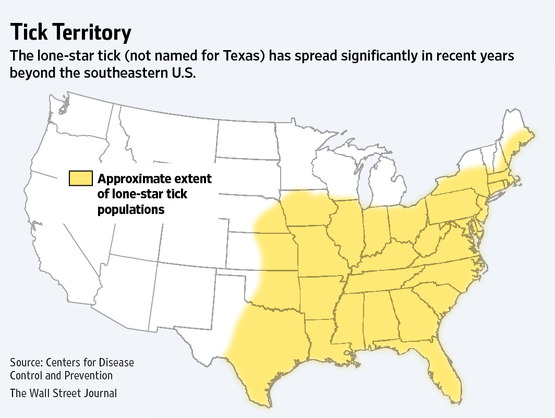 If you are bitten by a tick and live on the eastern half of the United States you may need to be careful in what you eat.  A recent article in the Wall Street Journal indicates that certain tick bites can lead to red meat allergies, in which people have been visiting emergency rooms across the US with strange reactions hours after meals.  Doctors are identifying these allergic like reactions to the consumption of red meat following tick bites, most commonly from the Lone Star Tick. The allergic reactions range from vomiting and abdominal cramps to hives to anaphylaxis, which can lead to breathing difficulties and sometimes even death.

According to the Wall Street Journal cases of the unusual allergy were first identified at the University of Virginia at Charlottesville in 2007, and are now being reported as far north as Nantucket, Mass., and on the east end of New York’s Long Island.  It is only recently that the issue is really being brought to public attention, in which the growing Lone Star Tick population is resulting in a drastic increase of red meat allergies following bites.